Owned by Vince and Susie Greco, The Madelyn has been curated into an enchanting one-of-a-kind wedding destination, complete with a rich family legacy and a history that dates back to the 1800s.

Keep reading about the makings of a generational family barn. 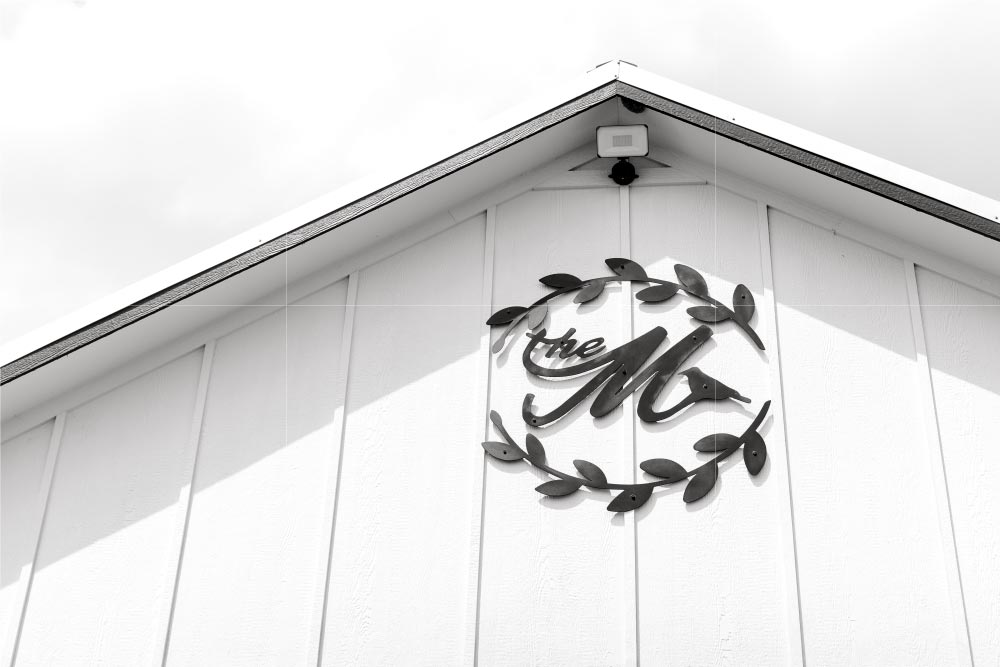 A Legacy To Build Upon

The creation of The Madelyn Venue & Guesthouse began, unbeknownst to anyone at the time, by the Greco family of Calabria, Italy & The Rutdledge family of Middletown, Ohio…

First built in the 1860s, The Madelyn began its humble roots as a family homestead belonging to the Rutdledge family of Middleton, Ohio, where it remained in the family for more than a century before being purchased with the intent to build a winery, by Anthony Greco.

In 1932, Anthony Greco was born and raised in Calabria, Italy, where he lived out his childhood before setting out to pursue the American Dream as a young adult in 1952. He arrived in the U.S. with little to no money to his name, and eventually settled in Middletown, Ohio, where he would eventually meet his beautiful wife Antoinette and go on to become a naturalized US Citizen.

Fast forward to 1982, Anthony and his wife pursued a new American Dream, the dream of owning their own land with room to expand. This was the year they fortuitously came across a 63-acre fixer-upper, previously owned by the Rutdledge family, that they saw great potential in.

With the goal of building a winery and a generational family legacy, they made the bold choice to purchase the land and the 2 barns, 5 buildings, and 10-room farmhouse that stood on it. After renovating and fixing up the old place by hand, Anthony soon began fulfilling his passion for making and selling wine.

Anthony spent many hours in the winery, selling wine and entertaining locals with tales of rich European history. And over the years, the growing Greco family enjoyed many events and get-togethers at the winery and family farm, all of which instilled a deep love for the history and dreams it represented.

But as the years passed, Anthony made the difficult decision to retire from his winemaking business and sell the family farm. And unfortunately, it was purchased by a buyer who didn’t share his intentions of tearing down the historic buildings on site.

At this time, Anthony’s son Vince, who spent his youth working the family farm and helping his father with the winery, made the bold decision alongside his wife Susie to pursue a new Greco American dream of their own. A dream that would honor Anthony and Antoinette’s pursuit of building a legacy for the future Greco line to build upon.

While it was a massive feat in itself, Vince and Susie made the bold decision to completely relocate “grandpa’s” barns and buildings from Ohio, all the way to Collinsville, TX. And it was here, in North Texas, that the family love and legacy has continued, and The Madelyn Venue & Guesthouse was founded.

Following the relocating of their family’s buildings, Vince and Susie carefully coordinated a massive group effort of friends, family, and community members to assist them in bringing their vision for The Madelyn to life.

They found great importance in ensuring The Madelyn’s it’s 19th-century authenticity, by salvaging the wood from their family’s farm and other historic buildings built in the same era. To this day, the Greco family takes pride in the fact that there isn’t a single piece of wood that lines The Madelyn’s interior that’s less than 150-years old, lending to the antiquated charm and the essence of rich history that couples and guests feel as they enter the building.

The Madelyn was carefully built using the 150-year-old mortise and tenon barn frame that was erected by the first settlers on the Monroe farm, who sourced aged oak trees from their private land to build it by hand. 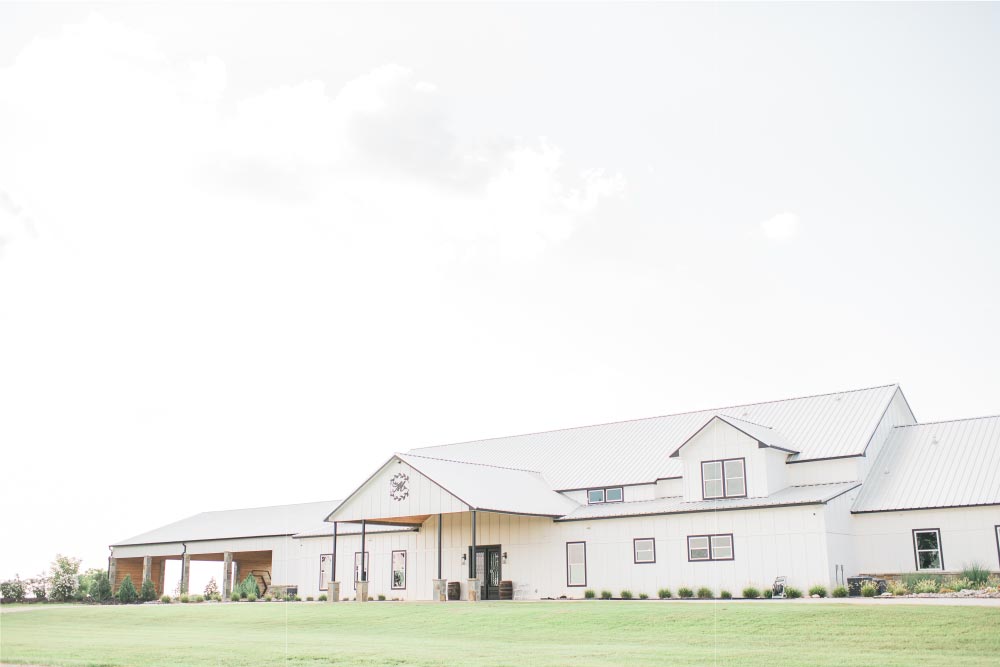 While the original frame was smaller than what you see today, the Greco’s had a greater vision in mind, and so The Madelyn was expanded to 10,000 square feet of exquisite event space perfect for celebrating joyful once-in-a-lifetime occasions with loved ones.

To add to the grand opulence of the venue, the Greco’s chose to increase the height of the vaulted ceilings to 31-feet, with open-air exposed barn beams that showcase the grandness of another era. And knowing Texas weather, they added a 3,750 square foot covered outdoor chapel with a picturesque westward view that makes for a perfect cotton candy sunset backdrop for ceremonies.

Careful consideration was taken to house the history of the Ohio barns and farm buildings which is evident by the attention to detail in the interior construction and repurposing of materials.

The barn beams showcase the grandness of another era and are accentuated by the barn’s original pine siding on the ceiling and oak siding on the walls. Every piece of barn wood used was heat pressure washed before repurposed, logging in countless manpower hours, all done with the help of family and friends.

The centerpiece of the venue features a 20’ grand staircase custom built by Amish craftsman for the brides of The Madelyn.  The stairs/risers are repurposed floor joists from the Ohio farmhouse, while the stringers are 150-year-old logs used as hay loft joists and the newels & railings are barn beams. Atop the staircase is the landing which provides a sweeping view of the venue as it leads to the bride and groom suites.

Staying true to the family’s desire to continue the “life” of the Ohio property, the floors in the farmhouse were also salvaged. The venue landing floor came out of Anthony’s 2nd-floor office, with the groom’s suit flooring a combination of bedroom and parlor room flooring. The hardwood floors in the bride’s suite were repurposed to the farmhouse by grandpa but originally came from a stagecoach station (circa mid-1800’s)in Dayton, Ohio. Both suites are walled with the same pine that covers the venue ceiling, originally the barn siding. The floors were salvaged, but the groom’s suite became the new home for horse tackle pegs from the barn, providing the perfect spot to hang garment bags. As the structure was re-erected in 2019 we have incorporated everything needed to host your special day in a very elegant setting.

The Guesthouse is original to Texas! Over the years, it has been expanded from a small two-bedroom “shot-gun style” farmhouse to what is now a modern-day farmhouse, offering sleeping accommodations for 10-12 guests. Each room in the house embraces the warm feel of country living with the elegance of today’s modern necessities. The front, screened-in summer/heated in the winter, the porch has a view of the pond and the large back patio has a sweeping view to the west, a perfect place to enjoy the evening sunset. Allow your wedding party, family, and special guests to relax in comfortable accommodations before and after your wedding.

We would love to share our family treasure, The Madelyn Venue & Guesthouse with you to help make your event, whatever it may be, a memorable one. 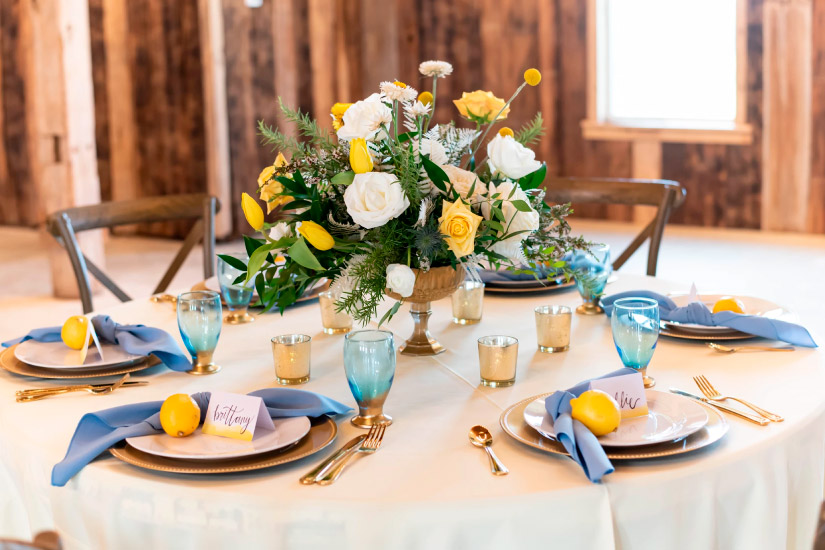 Ready To Book A Tour?

Have A Question? Want To Learn More? Ready To See Why The Madelyn’s “The One”?

The Madelyn is a definite “Must-See” wedding destination, and we can’t wait to show you around. Please fill out the form below to tell us more about your special day.

It’s Your Day, And We Look Forward To Helping You Bring Your Dream Wedding To Life!